The Words I Never Wrote

The story then switches to the 1930s, where English sisters Cordelia and Irene end up on different paths and different sides of WWII. Irene moves to Berlin after marrying a German man; her husband rubs shoulders with high-ranking Nazi officials, putting her in treacherous situations. Cordelia ends up in Paris working for a newspaper. The sisters correspond with letters, but have a falling out after mistruths lead to complications.

The Words I Never Wrote (2019) by Jane Thynne is an intricate story that builds momentum as more secrets are revealed. Juno seeks to complete the story and discover what happened so many years ago.

If you enjoy reading novels set during WWII, check out our book lists.

An Irish-American lad, Tom Murphy, and his very wacky family are expecting to have him married off very soon, but the bride must be an Irish girl. Tom travels to Ireland for his best friend's wedding and stumbles through the pubs and over the hills in his quest for a bride.

Fred Willard, Colm Meaney, and Kevin Farley all make appearances. Tom learns in the end that Ireland is not the mythical land of old movies, but a real, hardworking country moving forward.

If you enjoy Irish films, check out some of the titles on this list.

In Ariel Lawhon's latest gripping historical novel, she delves into the life of socialite spy Nancy Wake. Code Name Hélène (2020) is richly detailed. The chapters alternate between her early life and her life as an agent.

This New Zealand native left home at 16. She moved to Europe and worked as a journalist. Nancy eventually married a Frenchman. When France falls to Germany during World War II, she starts working for the Resistance. She is quite a dynamic leader with good instincts and quick reactions. I was truly disappointed when this ended.

Visit Overdrive to read the ebook or listen to the audiobook of Code Name Hélène. Learn more about the real-life heroism of Nancy Wake by reading this History.com article. For more novels featuring women in the resistance, check out our book list.

Based upon real events, a local DJ gets involved between two rival families for the ice cream trade in Glasgow.  Bill Paterson, who plays DJ Dickie Bird, is in top form.  The introduction is rather long before you get into the reason for the film.  While it can be slow moving, it does have a good sense of humor.

This Slovakian film garnered 13 nominations and 9 wins from all over the world.  The Interpreter (2018) tells the story of 80-year-old Ali Ungar finding a book written by a former SS officer describing his wartime activities in Slovakia.  Ali discovers this person was responsible for murdering his parents.  He tries to take revenge, but instead finds the officer's 70-year-old son, Georg.  The son hires Ali, the interpreter, to travel with him to find out more about his father, with whom he never had a close relationship. These opposites travel together to interview eyewitnesses to the slayings, but along the way the very different men find out that they are not so different at all.

This movie was superb, with believable characters that will wrench at your heart.  Watch The Interpreter on Hoopla today.

In Slovak, German, and Russian with English subtitles.

​I really enjoy the work of Bill Nighy.  While being a gifted comedic actor (Pirate Radio, Dad's Army), he also excels at portraying Johnny Worricker, an operative of MI5 nearing the end of his career.  His life has been upended when his boss and best friend have damaging information on the Prime Minister, but dies before it can be verified.

Page Eight (2011) is a spy thriller that isn't about car crashes and explosions, but instead about dirty money, hidden agendas, political maneuvering, believable characters, witty dialogue, and contemporary situations.

Watch it on Hoopla today.

Enjoy this story inspired by the Academy Award winning short film that shows the love a father has for his daughter by learning how to take care of her natural hair. "My hair is mommy, daddy, and me. It's hair love!" Delightful!

Hair Love (2019) was written by Matthew A. Cherry and illustrated by Vashti Harrison. Listen to the audiobook on Hoopla, read the ebook on Overdrive, and watch the Oscar winning film on YouTube.

Why would someone create a show about amateur metal detectorists? I put aside my doubts and tuned in. These two oddball Englishmen travel all over the countryside hoping to uncover buried Saxon treasures! But it's a cutthroat hobby—who would have thought? I was hooked after the first episode of Detectorists. Share the lives, loves, and detecting ambitions of Andy and Lance. You never know what you will uncover.

Binge the whole series on Hoopla! The complete series (2014-2017) is available to watch instantly.

A Madness of Sunshine

Anahera returns home to a small New Zealand village after she is widowed. Will, a police officer new to town, is struggling with his own demons. They are prickly with each other.

When a local girl with a bright future disappears after going for a run, Will and Anahera team up along with the whole town to search for her. In the course of his investigation Will uncovers rumors and evidence of previous runners disappearing. He relies on Anahera for local insight, and the pair dig up crimes of the past.

A Madness of Sunshine (2019) by Nalini Singh is a gripping romantic suspense novel in a lushly described New Zealand setting. The story is filled with lots of red herrings and a shocking ending.

In 1932 England, Violet is considered a surplus woman, a 38-year-old doomed to spinsterhood after the Great War. She doesn't accept her fate and tries to live her life despite her mother's constant harping. She leaves home and moves to Winchester to work as a typist.

While attending church services, Violet discovers a group of women who embroider seat cushions and kneelers. She joins this group of broderers, learning the stitches and the meaning behind the designs. She meets Arthur, who rings bells at the cathedral.

A Single Thread by Tracy Chevalier (2019) features a strong female character with an unapologetic approach to life. She defies convention and charts her own course. While there is a feeling of despondency, the reader learns that not all women accepted their fate. Violet builds a meaningful life. Chevalier provides a great sense of place with her setting in a small English village.

Meet Me in Monaco 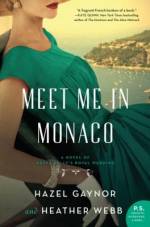 ​The novel begins with Grace Kelly in Cannes, being pursued by James, a British photographer. She ducks into a perfume boutique where Sophie gives her refuge. Over the next 30 years, James and Sophie form a friendship and mutual admiration, though life sometimes pulls them in opposite directions. Meanwhile, Grace meets and becomes engaged to Prince Rainier, returning to Monaco for the wedding. Grace has never forgotten Sophie and orders the perfume for her wedding from the boutique. The publicity causes business to pick up.

In Meet Me in Monaco: A Novel of Grace Kelly's Royal Wedding (2019), Hazel Gaynor and Heather Webb have written an amusing and delightful novel with a light romance amidst the wedding of the century.

After WWII, Maeve and Danny's father buys a large house in Pennsylvania, which appalls their mother who believes it's too big of an expense. After a couple of years, their mother disappears and the children are never told why. Their father finds a new wife, with two daughters of her own, who move into the house. Their new stepmother is never kind to Maeve and Danny and, years later, when their father dies, she throws them out of the house. The stepmother has put her name on everything the father owned—the only thing she can't claim is a trust fund that was set aside for his children's education. Maeve decides to use up as much of the trust fund as possible to keep her stepmother from getting any of it and informs Danny that he will be a doctor, although he wants to be a real estate investor like his father.

Over the years, the siblings visit their old house, sitting outside in their car, never allowed inside. The house binds Maeve and Danny together, even when their lives start to separate, and they always remain dependent on each other. The Dutch House (2019) is an interesting story about what families do to each other and learning to forgive. Ann Patchett's detailed writing will keep you turning pages and thinking about the novel long after it is over.

Woman with a Gun

Aspiring author Stacy Kim visits an art museum showing the photography of Kathy Moran. She is stunned when she sees "Woman with a Gun," which won the Pulitzer Prize and made Moran famous. It shows a woman in her wedding dress, standing at the shore, facing away from the camera and towards the sea, holding a six-shooter.

The photo captures Stacy's imagination and sets her on a quest to uncover the story behind the woman and the circumstances that lead to the photo. She learns that Megan Cahill—the woman with the gun—was suspected of killing her husband on their wedding night. It was never proven and the murder remained unsolved. Woman with a Gun by Phillip Margolin is a stunning, suspenseful story full of twists and turns.

In Minnesota during the Great Depression, the Lincoln School was tasked with "re-educating" Native American children and erasing their culture. Odie and his brother Albert escape the school alongside little Emmy and Mose, all of them orphans. The four children begin their journey in a canoe and set out for St. Louis, where Odie and Albert hope to find their aunt and form a family—but they'll have to put their lives on the line and offer up their souls for salvation first.

Along the way, the kids meet a cast of characters that enrich their travels and strengthen the unifying thread of love and hope throughout the story. This Tender Land by William Kent Krueger has touches of Huckleberry Finn and The Grapes of Wrath and would be an ideal read for someone looking for a new book after finishing Where the Crawdads Sing.

This racy read begins in 1940 when 19-year-old Vivian Morris is thrown out of Vassar College. Her parents send her to Manhattan to live with her Aunt Peg, who owns a crumbling theater. Vivian meets the charismatic and sensual theater players, embarking on a wild adventure.

Elizabeth Gilbert captures the fictitious Vivian's life from her wild-child teenage years through her 80s. The story covers WWII, family tragedy, unexpected friendships, and self-discovery. City of Girls (2019) has a strong sense of place, with New York City featured as a character. This lively, sensuous, and interesting novel showcases one life in the 1940s and 50s.